skip to main | skip to sidebar

Life without Peter is very difficult. I don't know what to even say about it outloud or online, so I won't even attempt anything here at this point. Lots of tears and heartache continue, good days and bad, but a lot of emptiness without Peter, for all of us. Meanwhile, these commercials recently came to my attention, and if there is anyone who visits this blog anymore, they are worth seeing, although they will also make you cry.

This commercial is one I saw posted on one of the facebook medical sites I used to visit for support with Peter's care. It does a pretty good job capturing the "mom" experience of a chronically ill child. SickKids VS: MomStrong

This next one also captures what it is like to watch your chronically ill child go through countless procedures as he is growing up. This is the commercial that reminded me so much of the endless procedures, doctor visit, medical tests, fears, and hopes Peter went through. SickKids VS: This Is Why
https://www.youtube.com/watch?v=vh-WS1FGKTM

Peter went through a lot in his short life. He was a brave kid, like so many who face chronic and/or serious illness. He met a lot of amazing, loving medical heroes along the way, too, patients and staff. https://www.youtube.com/watch?v=78mNZeDaMtk&feature=youtu.be
Posted by Peter's Mom at 2:26 PM No comments:

So much has happened since I posted a year-and-a-half ago. Most of that delay has simply been because Peter has been busy -  medically, being a kid, and as part of a semi-large family.

In the following months, I may eventually update more to his blog, or let things just remain as they are. For now, I share with you portions of Peter's obituary. The photo on the rooftop of the hospital captures his smile and enthusiasm throughout that whole last day. We miss him terribly.

On August 9, at about 3 AM, Peter Joseph Michalski passed away at the age of 13.


Peter was preparing to enter seventh grade this year with his younger brother, D. This would have been their first school experience having been home-schooled in part due to Peter’s frequent medical travel and a compromised immune system. His constant companion and best friend, D, was looking forward to accompanying his big brother on this new adventure.


Peter's life-long medical and hospital journey began at four months old with three emergency admittances and nearly a year-long hospital stay. He had multiple major surgeries in that time related to his liver and intestines and resulting complications. There were many more subsequent operations and procedures in the years following, along with several years of in-home nursing care and therapies.


Peter’s medical care was transferred from Philadelphia to Boston Children’s Hospital after more than half a year inpatient in order to be part of a trial therapy with Omegaven, an innovative lipid therapy for those requiring IV nutrition. His ongoing care and hospitalizations required travel to Boston every six to eight weeks with the doctors, nurses, and support staff becoming his friends and a caring extended family.


Peter’s great interest in life was the globe he wished to eventually travel. Early on, places and cultures captured his imagination and through a continual study of maps and atlases, he achieved a starling mastery. He visited places vicariously through the trips of others and their photos, inquiring of details with probing questions about the number of floors in a particular building, whether they had seen a prominent landmark, and of course, what they ate along the way. He had committed to memory the nations of the world, the capitals, notable architecture, and an array of facts to such an extent, that, though an unlikely contender with his disarming playful and cheerful manner, he handily won a geography bee locally.


But, it was people he really loved, and it was hard not to love Peter back. He had an authentic interest in others and would never tire of another person’s presence. He made everyone feel like they were interesting and worth listening to. He wanted people to know him, who he was, and what excited him about life and the world that many take for granted. As someone from Boston Children's Hospital noted, he was like the Mayor of the hospital, everyone knew him and faces lit up as he would recall the details from the last time they talked, beaming with a wide genuine smile.


He touched the lives of all who encountered him including people around the world who were aware of his illness and who sent prayers and support.


As Peter was being wheeled into what would have been a multi-organ transplant surgery that never had a chance to proceed in full, he was chatting with the doctors and nurses about where they might be traveling next. He was happy and excited going into surgery, he had no fear, he was not in pain, and most importantly, he was at peace with God surrounded by his family and many others who loved him.

Peter was the fourth of five children.


He will be deeply missed. Peter Joseph, pray for us.


In lieu of flowers, donations to the Oley Foundation in memory of Peter would be appreciated. The Oley Foundation is a large support network for people who depend upon IV nutrition and/or enteral tube feeding, of which Peter depended for most of his life. Peter found great pleasure in  attending one of their annual conferences last year, and meeting dozens of other people on IV/tube feeding, just like himself. https://oley.org/donations/donate.asp?id=8905

I'm glad that these blog accounts don't just disappear after long silences. Maybe it is best to just update in summary form from time to time, versus delivering updates blow by blow. It does make for some very long pauses, but it also means less time on the computer, too. Here is the latest in summary fashion.

Last April, after 4 years off TPN, Peter went back on TPN. He had been having a slow nutritional decline, which was only obvious in retrospect. We were noticing small, but increasing issues, such as hand tremors; episodic "pins and needles" in his hands, feet, and legs; a strange month-long eruption of red-brown petechiae-like spots over both legs; heavy dandruff. Peter started losing weight, and then he went into a full month of GI distress/increased gut motility, ending up with a loss of about 10 pounds over a two month period, and episodes of rectal bleeding. The team was concerned not only about the nutritional losses, but the possibility and likelihood that Peter was entering liver failure. Easter weekend, Peter was admitted to CHOP and put on IV hydration and then went up to Boston Children's Hospital to get a central line (a Broviac instead of a PICC this time) and start TPN. The team agreed he could also go back on Omegaven as his lipid. Within a month or two, Peter had regained every bit of the weight he had lost, and the unusual symptoms he had prior to restarting TPN had gone away. Peter's labs started looking a little bit better as well.

Peter is happy about going to Boston every two months again, as he loves to travel and cities are of great interest to him. He is quite frustrated having a central line and TPN, though. His liver is being carefully watched and monitored, as most of the images and tests suggest it is in some stage of cirrhosis. We spent many months this past year thinking that he will imminently need to get re-evaluated for a multivisceral transplant. As of our last visit to Boston, though, the decision is that we can hold off on listing a little longer for now, given his overall gains and improving labs. He will get another MRI of his liver in four months, and we'll see how that compares to the one he had towards the end of 2017.

On a less medical note, Peter is 12 years old now! He still enjoys geography and fact books and trying new foods (even though his appetite is down now that he is on TPN again). In addition to wanting to be a world traveler, chef, cartographer, and artist, this year he learned about Thomas Edison and has become inspired to add "inventor" to his list of career aspirations. 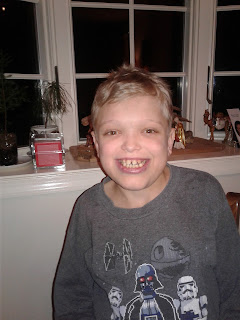 Physicians as part of the cure

Peter still has ups and downs with liver health and nutrition absorption, but overall he is doing fairly well. One of these days I'll update the health issues, but he is well enough that things are busy in a good way, leaving the writing of updates on the computer as low priority. It did seem worthy of logging on today to post the following though.

St. Hildegard is one of the saints of the day today. Per the site, http://www.catholicireland.net/saint-day/  :